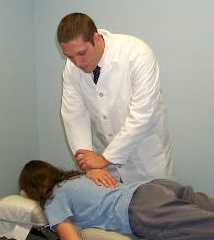 Henry moved from Vermont to South Carolina to attend Clemson University on a full academic scholarship as National Merit Scholar and high school valedictorian. He completed a one year cooperative education program and graduated from Clemson with a B.S. in computer engineering and minor in mathematics. He earned his Engineer in Training certificate and started a master's degree at Clemson as a graduate teaching assistant in Electrical and Computer Engineering but decided to become a chiropractor after chiropractic care helped him recover from an injury. Henry graduated from Sherman College of Chiropractic at the top of his class. He opened his practice in Greenville in 2006 and has since helped bring pain relief and improved quality of life to thousands of patients in the Greenville / Spartanburg area. It is not uncommon for patients to travel from surrounding areas to receive Dr. Henry's care. Dr. Henry's research has been published in peer-reviewed journals and he has presented at chiropractic, medical, and public health conferences. Dr. Henry is married with two children. He is a member at Riverside Baptist Church. He is a Past Master of St. Johns Lodge and is a member of York Rite, Scottish Rite, and Hejaz Shrine. Henry has over 25 years of martial arts experience, with black belts in Brazilian jiu-jitsu, judo, karate and taekwondo. He served as President of the Clemson University Taekwondo Club. He enjoys cooking and many patients ask for recipes.